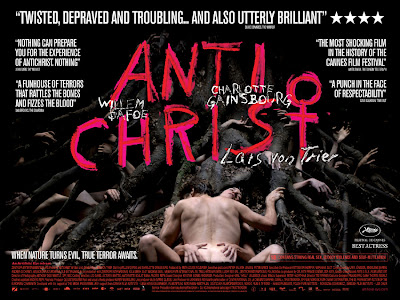 This Lars Von Trier film from 2009 was one of the most controversial of the year. But did he purposely make it to shock and anger people? Most definitely. Von Trier’s ego grew to new heights with this film starring Willem Dafoe and Charlotte Gainsbourg. It has yet to find a U.S. distributor and can only be seen through on-demand, online or if you have a multi-region DVD player.

The two words I would use to describe this film would have to be graphic and intense. This film is divided into four chapters, not including a prologue and epilogue. It involves just the two actors given the generic names of “He” and “She”. The story starts with the prologue shot in black and white and in slow motion. Dafoe and Gainsbourg are having sex, while their young son falls out a window to his death. The rest of the film examines the couples grief, pain, and despair. These are also the titles of three of the chapters, the other being “the three beggars” towards the end. 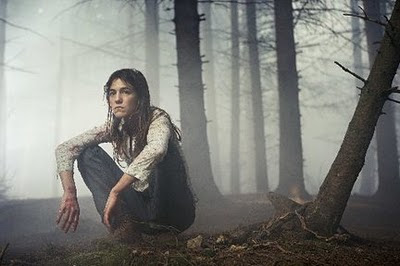 The imagery in this film is nothing short of jaw-dropping. You will probably either think this film a work of genius or one of pure ego-maniacal crap. The story loads on the metaphors and graphic imagery to make the audience as uncomfortable as possible. Dafoe and Gainsbourg give absolutely fearless performances, earning Gainsbourg the best actress award at the Cannes Film Festival. Dafoe’s character of “He” is very controlling and since he is a therapist, he takes over care for his wife. Although we find out that she is much more troubled than we are lead to believe. They retreat to a cabin in the woods they call Eden, which she seems to be fearful of. She spent a lot of time there alone with her son in the past trying to complete her thesis on human nature. It was never finished and this could possibly be a reason for her unstable condition. He relishes in the power he has over her and is the only way he can feel close to her. He really acts quite indifferent about his son’s death, which in itself is quite disturbing.

Animals and nature play a big role in this film and is often used as metaphor and symbolism. The last twenty minutes are intensely graphic and brutal, but is this in service to the story or just to freak people out? In a way, it can be refreshing to see the actors and directors audacity to commit such material to film. So should you see this film? That depends, how hardcore are you? I mean it’s not a great film by all means, but it is quite a spectacle. “Chaos reigns” quotes the fox.