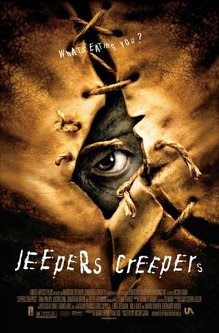 
This 2001 horror movie starring Justin Long, in one of his first roles, is a real gem that deserves some attention. “Jeepers” was directed by Victor Salva, who also directed the 2003 sequel, shows a good eye for tension and horror. This film got financial backing from famed “Godfather” director Francis Ford Coppola’s company American Zoetrope.

Darry (Long) and Trish (Gina Phillips) are brother and sister driving home from college on spring break. They have great chemistry and work really well off each other. Driving a classic car through the heartland of America they argue like any brother and sister would. After a bathroom break, an older rusted out truck drives upon them like a bat out of hell, blasting its horn and tailgating. After getting passed they wind up seeing the truck further down the road. There is man dumping something that looks like a body wrapped in a sheet down a sewer pipe. They are spotted by the man and are eventually run off the road. 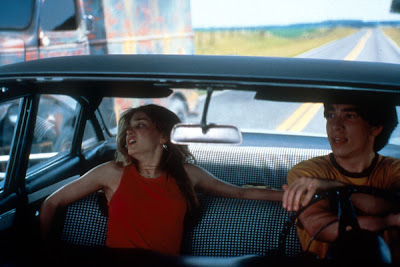 Darry and Trish go back to the pipe to investigate and make sure that nobody is still alive. At times this movie can be self-referential, in that the characters know they are in a horror movie and try to outsmart the basic stereotypes of the genre. “Scream” from 1996 was the movie that set the standard for this. After hearing voices, Darry falls down the pipe to find the grotesque lair of “The Creeper.” The lair is the basement of an old abandon church. Darry emerges from the lair and they drive off to get help at a local café. They don’t find much help except a psychic that mysteriously calls them on a pay phone. The whole plot of the movie is kind of cheesy and unbelievable, but the characters really save this movie and make it into a surprise hit.

As explained by the psychic, every 23rd spring for 23 days the Creeper feeds. It sniffs out certain people and eats particular organs that its body absorbs and becomes apart of him. The Creeper reveals that he has bat-like wings, and upon close inspection, he looks a bit like a meaner version of the “Creature from the Black Lagoon”. As I mentioned in the last review cops are really not much help when it comes to these kinds of movies. There is a big final battle at the police station where the Creeper takes over. I won’t reveal the ending but it is a little different than what I expected.