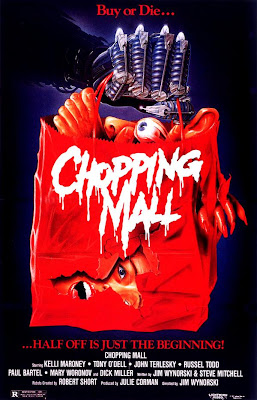 
This little nugget of 80’s horror is a crazy piece of campy trash. I say this in a good way. Do you have fond memories of hanging out at the mall for hours on end as a teen? There is a special little niche of movies made about mall culture. Most notably Kevin Smith’s Mallrats (filmed in Minnesota, woohoo!). This film also takes a few hints from Romero’s “Dawn of the Dead”, and quite strangely the “Mall Cop” comedies of 2009.

Once known as “Killbots” in theatres, it was renamed “Chopping Mall” for video. It looks like some marketing guy was trying to look smart because there is little if any “chopping” going on. The three Killbots are basically robotic mall cops that keep tabs on things when the mall is closed. When a group of young mall employees plans an after-hours party in one of the stores, the Killbots are on the prowl. Of course, the ‘bots malfunctioned while charging when the building was hit by lighting. The kids need to survive until morning when the mall opens up again to survive. That’s pretty much it for the story, but it is entertaining. It’s very cheesy and very 80’s. This was a Roger Corman production so it was filmed on a very small budget, but that’s part of the charm of the film.

This is a minor cult hit on video and DVD, probably fun to have on at parties or seen with a group of friends. If you looking for a trip down memory lane, check this flick out. “Thank you, have a nice day”.