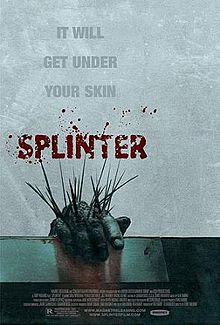 Splinter is a creepy sort of virus, monster movie that is quite original when it comes to its creature designs, but as for the rest of the story, there is a little something to be desired. Toby Wilkins, who has mainly worked in special effects, has garnered a lot of praise in this indie flick for his directing abilities. This film got him his next job of directing The Grudge 3.

Seth and Polly are a young married couple from the city who are going on a camping trip to celebrate their anniversary. Seth is an intellectual city dork, while Polly is a hot, kick-ass chick that makes all the decisions. How they ever got together is a complete head scratcher. Seth is working towards a Ph. D in biology, even though he is completely inept when in nature. Our modern society has lost touch with nature and the world around us. After Seth accidentally breaks the tent trying to put it together they decide to stay at a motel. Before they get there, they are carjacked by Dennis and Lacey a kind of Bonnie and Clyde on their way to Mexico. After getting a flat tire the group ends up at an empty gas station where the bulk of the story takes place.


The Splinter monster is a parasite that clings to a host and grows spiny quills. As Seth explains it operates on a molecular level. It hunts by attacking heat sources. Lacey the drug-addicted girlfriend is the first to fall victim to the monster. There is a really cool scene when Lacey’s hand is cut off and turns into a spider like creature that scurries around the floor inside the station. The violence and gore effects are pretty effective and well done. In another great scene, Seth has the gory job of cutting off Dennis’s arm with a box cutter, when it becomes infected. A golden rule when it comes to horror movies is that cops are never any help. That is true in Splinter as a female cop is dispatched within a particularly gory fashion. Splinter builds a great deal of suspense in the fact that it doesn’t have a score or music in it. 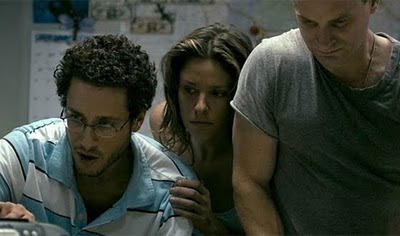 As they try to survive their situation they notice that if they stay cold or in the freezers they will be invisible to the monster. This would make sense since they know it hunts through heat, but our characters fail to put two and two together until near the end of the movie. It gets worse when they help Seth lower his body temperature, so he can go outside and get the car. This is completely ridiculous and is truly far-fetched, but can it be forgiven? This is a good movie that strives to be great and gets so close. Like most horror film the last frame sets up a possible sequel.