Very few words can make a hardened movie fanatic like me cringe more than when I hear “remake” or the now popular “reboot.” Studios will only remake successful movies that they shouldn’t touch, to begin with. Because nobody in their right mind would remake a piece of crap that actually deserves to be remade. No matter how good or bad the remake is they still make money due to sheer name recognition and curiosity. Now you must be thinking this is going to be a negative review. This movie is the exception to the rule. The original “Hills Have Eyes” was made in 1977 by Wes Craven, and it was mediocre at best. The job of remaking this film was given to French director Alexandre Aja who’s horror film “High Tension” was completely awesome (if you can ignore the illogical ending).

Aja and his writing partner Gregory Lavesuer took Craven’s original script and made into one of the sickest and taboo-busting horror films in years. Filmed in Morocco to look like New Mexico, it really looks like the surface of Mars. This movie is like a shotgun to your senses. Although it is based on some well-known horror clichés, it just works. 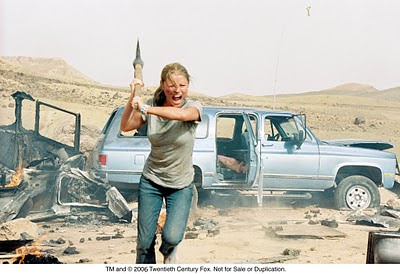 The basic premise of the “Hills” movies goes like this. Back in the 1940s and 50s, the United States did extensive Atomic bomb testing in the Nevada and New Mexico deserts. A group of miners were caught in the fallout and have been hideously deformed and now have a taste for human flesh. These mutants live in the abandon mine shafts picking off tourists. The bomb tests and radiation deformities are based on fact, while the whole cannibalistic mutant tribes are not (maybe).

The Carter family is taking a summer road trip to San Diego. They’re driving a Suburban with a refurbished Airstream trailer in tow. All of the characters are very likable and down to earth. Real characters, not just one dimensional stereotypes. They stop at the ole clichéd dilapidated gas station with the one crazy attendant, which is the very definition of a tourist trap. The man has a deal with the Hill people. The Carters take a shortcut suggested by the attendant and run to a trap that cripples their Suburban. Stuck in the middle of the desert, they try to make the best out of the situation. Little do they know they are being watched. The mood, atmosphere, and music add the perfect touch of creepiness. When the Hill people make there move on the Carter’s all bets are off. The filmmakers hold nothing back; this sequence of events is so utterly disturbing it will rock even hardcore fans. I don’t want to give away too much, because this is a movie that has to be experienced. Although this is a crazy story, it seems to be grounded in a sort of reality. This is an extremely rare occurrence when a remake is far superior to the original. There are two versions of the film available “R” and Unrated. There was a sequel made the following year that is very average.