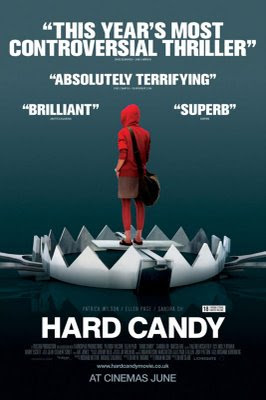 This little indie flick introduced us to Ellen Page and director David Slade. Made for under a million dollars, the film made a big impact thanks to its stand out performance by Patrick Wilson and the aforementioned Page. This film was shot with only four main actors over an 18 day period in California. Since then Slade has gone on to direct “30 Days of Night” and the upcoming Twilight film “Eclipse.”

Ellen Page plays Haley, a 14-year-old girl, who meets Wilson’s 32-year-old character, Jeff, over the internet. They decide to meet at a coffee shop to talk. Jeff is a photographer and interested in a lot of the same things as Haley. This in itself is a little creepy and unnerving. After a little pushing and teasing (the t-shirt Scene) Haley gets Jeff to invite her over to his apartment. The whole film has an unnerving balance to it. While Haley is far more mature than her 14 years, Jeff should surely know better. At his apartment, Jeff offers her alcohol and she accepts. They talk and Haley wants her picture taken. The story then does a complete 180-degree turn as Jeff’s drink has been drugged. Haley ties him up and holds him prisoner and interrogates him on the other girls he’s done this too. She wants him to admit he is a sick and twisted pedophile, but it he? He has obviously made some pretty poor decisions, but does he really deserve what Haley has in store for him?

Page is an actress that can convincingly play someone much younger than she really is. Although it wasn’t much of a stretch in this film, as she was 17 during filming. Her shy girlish demeanor quickly transforms into the smart, badass chick that physically and mentally tortures Jeff. You could say in some scenes that Jeff could easily overpower Haley and take back control, but what can he do, she’s only 14. No matter how you look at it, it’s going to end badly for Jeff.

There is one disturbing scene where guys everywhere will cover their eyes and run away screaming. Haley decides to castrate Jeff to teach him a lesson; this is a difficult scene to watch no matter who you are. Does she really go through with it? You’ll have to watch. The back and forth between these characters is what elevates this film into something more than your average revenge fantasy film. The only problem I have with it is the ending. I can see how they arrive at it, but don’t really agree with it. They never really tell you who Haley really is and her motivations for are kind of alluded to but are still kind of fuzzy. This film is an intriguing little nugget that should be seen.