"The Descent" Chicks with Piks! 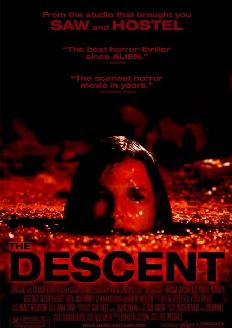 The Descent is one of the most nerve-shredding and scariest movies of the last decade! This was British director Neil Marshall’s second feature film. His first was the brutally vicious werewolf movie “Dog Soldiers”. Neil has a great feel for the horror genre and it shows as there are several homage’s to classic horror films within this movie.

The Descent is a unique film in that it has an almost all female cast. The only male meets a nasty end less than 10 minutes in as his family is involved in a car accident. The man’s wife (Sarah) and daughter (Jessica) survive. Throughout the movie, there are small clips of Jessica holding a birthday cake that also comes into play in the UK version ending (more on that later). One year after the accident Sarah meets five of her girlfriends at a cabin for a cave-exploring expedition in the Appellation Mountains. There’s nothing like a little spelunking to relieve some stress, I guess. This was an all British production that was also filmed in Britain but was set in the eastern United States. It must be our fine American Mountains. All the women are well cast and relatable. At times it can be hard to tell a few of them apart with all their gear on, but the filmmakers do make a conscious effort to avoid any confusion. When they get down in the caves, anyone who is even a little bit claustrophobic will totally freak out. These women are constantly squeezing through tight spaces creating a very tense atmosphere. Since the caves are completely dark the only lights the filmmakers use are the ones brought down by the women. A lot of scenes are lit by flares, giving everything a menacing red or green cast to it. 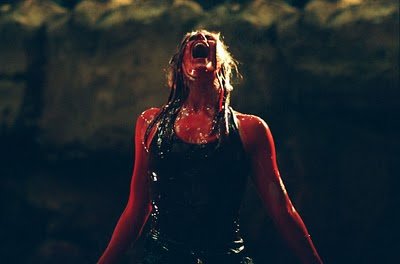 As they explore deeper and deeper into the caves one of the girls slips down a slope and we get to see one the most disgusting injuries known to man (or woman), the compound fracture. Maybe it’s just me but seeing bones protruding through your flesh is just not right. Anytime this happens in a movie you know they are so done for, this was no exception. The bad news continues to mount when they start seeing things. This is our introduction to the Crawlers. These possibly former humans have evolved and adapted to suit their environment. They are completely blind but have heightened sound and smell. The action between the women and the crawlers is intense and frenetic. This crazy action has its consequences when one of the girls mistakenly kills another. What makes this film so scary is the fact that the crawlers are blind. In many instances, the women are face to face with them or hiding just inches away. The women get split up and despite their best efforts start to die off. Our main character Sarah turns into a modern incarnation of Sarah Connor from T2. She is quite the crawler killing badass.

Like I mentioned in the beginning, the ending has two different versions. The U.S. version has Sarah escaping from the caves and driving off. While the U.K. version adds another scene on top of that making it a much ominous ending. U.S. audiences prefer happy endings, hey who doesn’t. The Brits I guess.