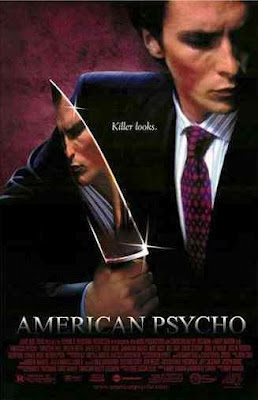 American Psycho is based on the insanely gory and controversial book by Brett Easton Ellis. The author has had several of his books made into movies such as “Less than Zero”, “Rules of Attraction”, and 2009’s “The Informers”. American Psycho is a book some thought to be unfilmable, but writer and director Mary Harron brought the vile character of Patrick Bateman to life in a movie that is more of a dark comedy than your average horror movie.

Harron was also able to get such name actors as Reese Witherspoon, Willem Dafoe, and Jared Leto. Not to mention Christian Bale, a largely unknown actor at the time, who lands the role of Patrick. Although Bale has been acting since the late ’80s in such films as “Newsies” and “Swing Kids”, it wasn’t until “Psycho” that he really started to appear on people’s radar. His performance was nothing short of spectacular. If you really want to see a shocking comparison of his work, watch “The Machinist” and “Batman Begins” back to back. Bale is a man fiercely loyal and committed to his craft.

Set in the late 1980’s New York financial district, American Psycho is a vicious satire on 80’s materialism and extreme narsarcism. Patrick Bateman is an investment banker for Pierce & Pierce, where everybody looks the same and it’s all about how big your ego is. In an early scene, we see Patrick, in his high rise apartment, go through his morning routine and in a voice-over, he says, “There is an idea of a Patrick Bateman, but I’m simply not there” If there is any emotion Patrick shows its greed and disgust. When his nightly bloodlust starts to take over and he states “my mask of sanity is about to slip.” He is sent over the edge by a business card. All the guys are showing off their new cards when colleague Paul Allen sends Patrick into a panic with a card that is better than his. This cannot stand and Paul eventually gets an ax to the face.  To fill out the 80’s vibe there is a lot of hit music played and talked about during some of the most important scenes in the film. Huey Lewis and the News, Phil Collins and Whitney Houston to name a few. 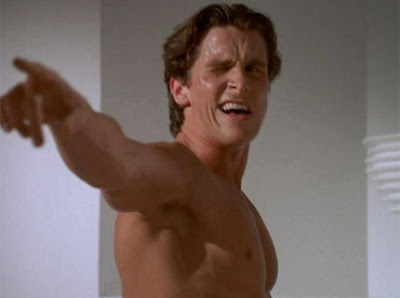 Reese Witherspoon has a small part as Evelyn, Patrick’s so-called girlfriend, who is always badgering him to get married. Patrick really couldn’t care less about her and is only going out with her to “fit in”. Besides he has a mistress named Courtney. Jean his secretary is the most down to earth and “real” person in the film and in Patrick’s life. Jean agrees to dinner with him, but at his apartment, he can’t go through with killing her and tells her to leave. Although when it comes to prostitutes he has no problem killing them. In one of the most insanely crazy scenes I’ve ever seen, Patrick fully nude and covered in blood chases a prostitute through his apartment building with a chainsaw. Bale completely inhabits this role and is totally insane. The final third of the film shows that Patrick has completely lost it and bears his soul to his lawyer’s answering machine. What happens the next morning really drives home the themes of the film.


The novel is extremely explicit in the violence and gore, while the film mostly leaves it to your imagination. The real horror comes from the character of Patrick Bateman, who seems to channel Hannibal Lecter in some scenes. There was an absolutely dreadful sequel made in 2002. It didn’t have any of the cast and crew from the original and is just pure trash. The original film made my list for best films of the decade for the 2000s and continues to be one of my personal favorite films.