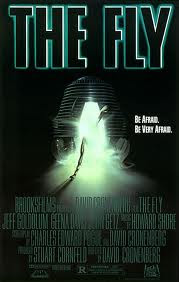 This film follows my current trend of 80’s horror movies and the second David Cronenberg film in a row. He has made most of his films independently and this being a big studio remake was a welcome departure for him. This film is filled with his trademark style of filmmaking and is a very rare case of a remake being far superior to the original. A sequel was made in the ’90s but we can just forget about that one.

Cronenberg’s remake stars Jeff Goldblum and Genna Davis, both with embarrassing 80’s style hair. Goldblum’s hair reminded me of John Stamos’s early years on Full House, the thinking mans mullet, you could say. Goldblum’s character, Seth Brundle is wild-eyed fringe scientist experimenting with teleportation. He meets Davis’s character Veronica or Ronnie for short. She is a journalist for Particle magazine. They meet at a party put on by Seth’s employer. He convinces her to come back to his warehouse laboratory slash studio apartment. He has a few tele-pods that look a little like beehives, that were constructed for him by different scientists. As he demonstrates he can successfully transport inanimate objects, but when he tries to teleport a baboon, he ends up with a twitching bloody mess.

Goldblum has that wildly energetic personality that translates superbly into his character. When asked why he always wears the same clothes. He states that like Albert Einstein he owns several identical suits of clothes as to not expend any mental energy on what to wear every day. He plays another such eccentric scientist in Spielberg’s Jurassic Park. A romantic relationship quickly develops between Seth and Ronnie and she helps him document his experiments on video.

Stathis Borans is Ronnie editor and former love interest. She probably left him because his name is Stathis Borans! He is your average 80’s douche bag. He has a manly beard and wears expensive suits. He is not blonde though. Stathis becomes jealous of Ronnie’s relationship with Seth and tries taking the teleportation story from her. Jealousy is a big theme in this film as all the characters are envious of each other. 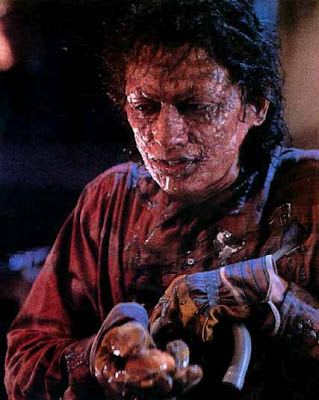 Seth finally makes a breakthrough and is able to fully transport a baboon. Then one night as he starts to fear that Ronnie is cheating on him with Stathis, he gets pretty wicked drunk and decides its time to start human trials. This starts a truly horrifying string of events that propel the movie all the way to its climax. Seth is successfully transported but they also happen to be a fly in the pod with him. Upon teleporting, the computer fused their DNA and molecules together and while Seth comes out looking normal, there are hideous changes to come. Seth slowly transforms into a human fly hybrid. He has increased energy, stamina, and an insatiable need for sugar. The make-up and visual effects are nothing short of spectacular. The whole process of Seth’s transformation is made all the more terrifying in the fact that we like this character and he has done nothing to deserve this or has he? Is this nature’s way of telling us not to mess with the natural order of things? Many films have explored the whole science VS nature VS religion theme and The Fly definitely puts in its two cents worth. Ronnie tries to help Brundle Fly, as he now calls himself, but he knows he is doomed. He compares himself to someone that has a terminal disease. To add more insanity to the story, Ronnie finds out she is pregnant and has a dream of giving birth to a giant maggot. The filmmakers then venture off into the pros and cons of abortion, and the value of life. The final confrontation between Ronnie, Stathis & Brundle Fly is equal parts vomit inducing horror and a heartbreaking love story. An odd combination for what is a genre-defining movie of the decade that was horror.