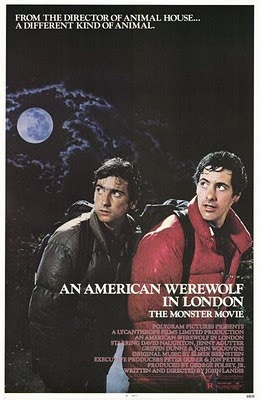 Arguably the best werewolf movie ever made! In the early 1980s director, John Landis was most known for his comedies like “Animal House” and “The Blues Brothers” when he decided to make a horror movie or is it? One of the major criticisms about the movie is that it doesn’t know whether it wants to be a comedy or a horror movie. While it deals with werewolves and is quite gory, there are also many scenes of pure comedy. This movie has inspired several young filmmakers since its release. Many horror comedies like 2004’s “Shaun of the Dead” have homage’s within them.

This is the story of two American college students backpacking through Europe. Jack played by Griffin Dunne and David played by David Naughton. While walking through the English countryside they seek refuge from the rain at a pub called “The Slaughtered Lamb” The locals go silent upon their arrival, and the two are looked upon as if from another planet. This seems so typical of Americans who travel abroad, we do tend to stick out. Jack and David are a great match and totally believable as best friends in their dialogue and actions, another credit to John Landis who also wrote the script. Upon leaving the pub they are warned to stay on the road and “beware the moon”. In the full moonlit night sky, they start to hear noises, as if being stalked by a wild animal. They’ve wandered off the road. Jack is then attacked and mauled to death by a werewolf, while David is merely wounded. The townspeople come to their rescue and shoot the wolf, who then turns back into a human.

David wakes up in a hospital to see Dr. Hirsch and Nurse Price. They tell him that the police report says they were attacked by an escaped lunatic, while David tries to convince them otherwise. David also keeps having nightmares, one in which he hunts and kills a deer with his bare hands. Believe me, this scene is incredibly funny. He also dreams of a group of Nazi-like creatures with Uzi’s invading his house and killing his family. It gets weirder; while fully awake he is visited by the mauled body of Jack. He asks him if he can have his toast. Jack has appeared to warn him that on the next full moon he will turn into a werewolf. The only way to sever the bloodline is for David to commit suicide. Jack utters the best line in the movie when he says to David “Have you ever talked to a corpse? It’s boring” It’s all about how he delivers the line that makes it so funny. The film is packed with one-liners like these. Each time Jack appears, he is in a further state of decomposition. Jack visits him in the bathroom and once again urges David to kill himself. David replies “I will not be threatened by a walking meatloaf”. Even though Jack is dead they still argue and carry on as they always have. 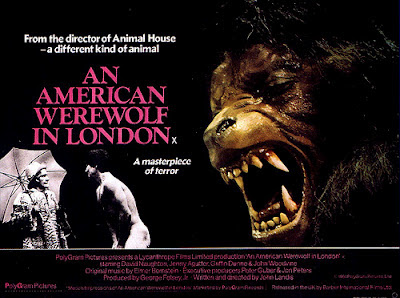 The most famous and memorable scene is David’s transformation into the werewolf. Rick Baker’s effects have yet to be topped, even in the age of CGI. Baker won the Academy Award for Best Make-Up effects. The scene still holds up as one of the best ever filmed. After David’s transformation, we seem him go on a killing spree that he has no recollection of when he wakes up the next morning in the zoo. Since being released from the hospital he has been staying with Nurse Price. They have started quite the relationship; little does she know the dark secret that he holds.

The werewolf genre is something that Hollywood has very rarely gotten right. Littered with such bombs as Cursed, Wolf, and Skin Walkers just to name a few. The British flick “Dog Soldiers” by director Neil Marshall is one the better films to come out in the last ten years. American Werewolf in London did spawn a crappy sequel in 1997 called “An American Werewolf in Paris” Often imitated and never topped “London” is hands down the best werewolf movie ever made!