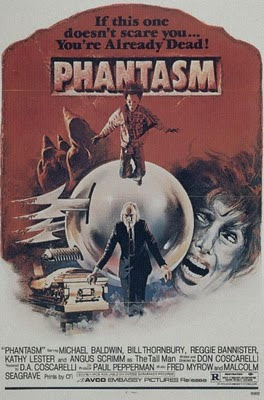 Two classic icons of horror came out of this movie made by Don Coscarelli in 1979, The Tall Man and the Silver Sphere. These two elements helped spawn three sequels, all of which were directed by Coscarelli. This is a fun scary ride of a movie that can be extremely weird at times. This first installment was filmed on a shoestring budget but all of the effects, story, and acting don’t seem to suffer much from it.

Like “Carriers” the last movie I reviewed, the story follows the relationship of two brothers. Jody is the older of the two and is now stuck raising his 13 year old brother Mike after their parents’ death. I’ve got to say that Mike is quite possibly the coolest bad ass kid ever. If I was a little older in the early 80’s he would be the kid you would dream of imitating. He owns a dirt bike; has a big knife strapped to his ankle, wears a jean jacket and has quite the dirty mouth. Not to mention the chrome .45 he wields towards the end. Mike is tough kid but also fears of being abandon by his brother. The one thing that keeps them together is their love for Jody’s muscle car. 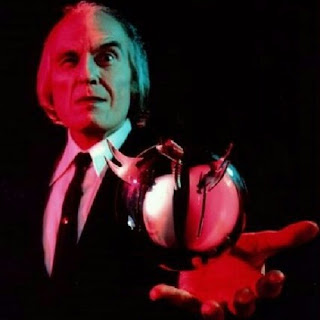 At the funeral of one of Jody’s friends we are introduced to the mortician simply known as the Tall Man played brilliantly by Angus Scrim (who also appears in the sequels). He is the creepy embodiment of death and as Mike finds out there is something not right with him. We then meet Jody’s other friend Reggie, an ice cream truck drive and aspiring musician. I know it’s quite the combo. Reggie always to just be along for the ride, but is a very necessary character. Mike is always following his brother to make sure he doesn’t leave him. Jody then hooks up with this bar skank and they go into the cemetery to make out and shit. While Mike is looking on in the woods he is attacked by a dwarf in a brown robe. Rumor has it that George Lucas stole this idea for his design of the Jawa’s. Mike runs away screaming and Jody follows him. Mike tells him what he saw in the woods and about the Tall Man, but Jody doesn’t believe him.

Mike wanders off to the mortuary and breaks in through a basement window. After he is found out, he is pursued by a flying metal sphere. It ejects blades that hooks on to your face and drills through your skull. The sphere and the dwarfs make this movie so WTF it makes it really fun to watch. There are a bunch of cheesy scenes with a lot of bad dialogue but the creative story line makes up for it. Jody finally comes around to believing Mike and they go together to the mortuary too face the Tall Man and his minions of evil. There is a big twist ending that I won’t give away, that really makes the story make sense in a crazy sort of way. A new DVD edition of the movie was released in 2007 and includes a bunch of special features that are all quite good. This movie is quite an accomplishment in the fact that you would never believe its was made on such a small budget, all of the money is definitely up on the screen and not the actors pockets.