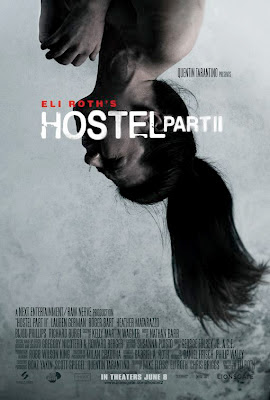 
The second installment of Eli Roth’s Hostel is just as good as the first. Usually, your basic horror sequels are far inferior to the original, but Hostel Part 2 keeps up the quality established by the first.

This time around we have three American college girls studying abroad in Italy. These girls are played by Lauren German (Beth); she is a smart level headed girl. Heather Matzarazzo is Lorna, the nerdy girl with issues. Although we see in a scene later that Heather is truly a fearless and committed actress up for anything. Finally, there is Whitney, the party girl played by who else but Bijou Phillips; an actress who has made a career playing such parts.

The story opens right where the first movie leaves off. Paxton has escaped the torture chambers of Elite hunting and is now dealing with some serious insomnia and anxiety issues. Paxton doesn’t last too long as his girlfriend finds him in the kitchen minus a head. The cat licking his bloody stump was a nice touch. We first find the girls in an outdoor figure study drawing class. The female model (Axelle) takes an interest in Beth’s drawing and she gives it to her. On the train to Rome, the girls meet up again with Axelle. Whitney tries to score some drugs off a few guys and it ends badly. Axelle tells them about the therapeutic spas of Bratislava and the girls are up for it. They arrive at the infamous hostel. One might say that this movie is just following to same story formula as the first one. It’s true except we also get another storyline involving two older American guys Todd and Stuart. Todd wants to bring Stuart along with him to where else Bratislava for an experience they won’t soon forget. Todd “buys” the chance to kill Whitney and Beth (for Stuart) in a scene where the three girls are auctioned off by their passport photos supplied by the hostel. Stuart is a family man who is always having second thoughts about what they are getting into, while Todd is the super macho extreme freak. We also get to see a more in-depth look at the inner workings of Elite Hunting. Every client must get a bloodhound tattoo (the company logo). They are given a pager, exactly like the ones you get at a restaurant, and told to wait until their girl is ready. The girls attend the local harvest festival where Lorna meets a prince charming with a ponytail. She is eventually lured away from the festivities for a moonlit boat ride despite Beth pleading for her not to leave. This, of course, seals Lorna’s fate. She is eventually strung up upside down in a scene that is so brutal you can barely watch. A female client ends up bathing in her blood. Nudity and bloody violence in one scene is very conflicting. Stuart gets a little to close when scoping out Beth at the festival. They have an awkward meeting, which sets up a big scene at the end of the movie. Hostel 2 seems to have less gore than the first film but it is definitely a case of quality over quantity. Beth tries to keep the group together, but with Lorna now missing, it isn’t too long before Whiney, and her new boy toy Miraslav, disappear the next day at the spa. Now all alone at the spa, Beth is pursued by a bunch of burly guys’ that don’t look too friendly. She runs into the woods and into the Bubble Gum Gang from the first movie. She is finally saved by Axelle and brought to a mansion. After getting cleaned up she is double-crossed and kidnapped.

There is a long montage style scene of Todd and Stuart arriving at the torture facility. They change into butcher like gear, choose their weapons, and try on weird looking masks. Their victims are all kept like cattle, chained in bunches in an enclosed space ‘til needed. They are then dressed in clothes and made up to the specifications of the client. When the guys are finally alone with their prey, a big turning point occurs as Todd freaks out when the violence becomes too real. After refusing to finish the kill, he is dealt with severely and winds up as dog food. Stuart on the other hand finally snaps and becomes the real psychopath. He has Beth dressed up as his wife. After a struggle, Beth gets the upper hand on poor ole Stuart. When the guards see this on the surveillance monitors they go in to break it up. We then see Beth holding a large pair of scissors over Stuarts “junk”. Since Beth is uber rich she able to make a deal with the owner of Elite. Stuart then crosses the line by calling Beth a “cunt”. Not a smart move Stu! She then cuts off his manhood and feeds it to the dogs. Ouch! To fulfill her deal she must get the tattoo and kill someone. With the help of the Bubble Gum gang, she lures Axelle into the woods and decapitates her. The gang then play soccer with the severed head all set to joyful music. Roll credits. This is one of the most insanely weird endings I’ve seen in a while. Hostel 3 is currently in the works, but it is said to be direct to DVD sequel. While Eli Roth has said he is not going to be a part of it, which can’t be a good thing.