"Carriers" is full of Pandemic Pandemonium 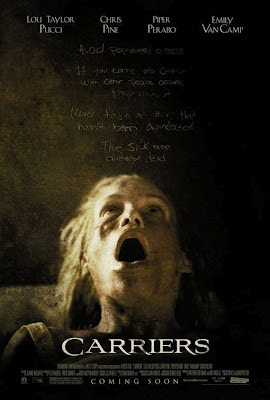 This is a small budget independent film that really shoots for greatness and for the most part succeeds. This film also has the full endorsement of Stephen King if that means anything to you. Instead of relying on creature effects and blood and gore this movie is more about the survivors as they drive through the barren landscapes.

The movie has a very talented cast including Captain Kirk, I mean Chris Pine in a role he took before he did Star Trek. He plays Brian a kind of leader of the group. His girlfriend is Bobby played by Pieper Perabo (of Coyote Ugly fame). Gee where has she been? Danny is Brian’s younger brother played strongly by Lou Taylor Pucci. Danny was accepted at Harvard before this virus thing come to pass. He has also brought along his friend Kate. This movie really makes you think of what you would do in a prolonged pandemic, and what you are willing to do to survive. Not just surviving the virus, but each other as circumstance become increasingly dire. Lawlessness, violence, face masks and bleach, lots of bleach. Brian came up with three basic rules for them to live by. First, avoid infection. Second, disinfect everything. Third, the infected are already dead.

The real focus of the movie is in on the brothers and their childhood memories of their vacations to the ocean (east coast). This is where they are headed to wait out the madness. They encounter a father and his little girl with their SUV blocking the road. They need gas but his daughter is infected. The group tries to avoid them but damage their car in the process. Brian has a gun and forces the father to hand over their keys. They are kept quarantined in the backseat behind some plastic. The father was headed to see a doctor who says he can help his daughter. When they get there they find that the doctor has failed and all of the infected kids are now drinking a drugged Kool-Aid in a mass suicide. When Brian points the gun at him and tells him to stop. The Doctor utters one of the movies best lines “Sometimes choosing life is just choosing a more painful way of death.” They all get back into the car, and the little girl says she has to go to the bathroom. When the father takes her out he knows that the others are going to take off without them. He takes his daughter and accepts his fate. 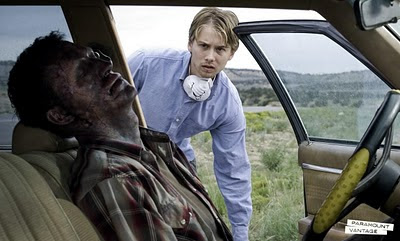 Further down the road they find a golf course and decide to blow off some steam. They hit balls into a vacant building, breaking most of the windows. That night a group of guys in hazmat suits takes them hostage. Upon inspection, they find out that Bobby is infected. After escaping, they find refuge in an abandon gas station. This is where an extremely tough decision must be made. Does Brian let his infected girlfriend stay with them and jeopardize everyone else or do they leave her behind? The movie is built on these questions. I started to think if the plastic gloves and face masks they wear really make a difference in protecting them. Each character has a strong sense of denial and shows them dealing with their situation in their own way. The SUV eventually runs out of gas, and this leads one of the most disturbingly shocking scenes in the movie. A car with two older women comes down the road; they have a Jesus fish hanging from the rear view. Danny tries to peacefully reason with them for some gas when Brain comes out firing. He shoots the two women as they try to speed off.

Brian is then found out to be infected and has given up all hope. Danny and Kate quarantine him in the backseat and they finally make it to the coast. Now Danny has to make the tough decision. This movie might be considered a horror movie, but it is really so much more than that. It’s not a perfect movie, but it’s an angle of the virus movie genre has rarely been explored. Give this one a look.