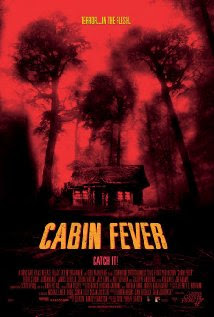 
This film is the directorial debut for Eli Roth. Eli is a Boston native and horror fanboy at heart. Cabin Fever takes on several parts of well-known horror films and put his out ideas and twists on them. This is a creepy cabin in the woods movie like Evil Dead. It’s a mysterious virus movie like The Thing. Then throw in some crazy backwoods rednecks like Deliverance. Cabin Fever is disturbingly authentic in the fact that this could actually happen. Eli got the idea from real life experience when he got a flesh-eating bacteria at an Icelandic horse farm.

Cabin Fever starts out like many recognizable horror flicks. A group of young people headed into the woods to a cabin for a weekend of partying. The main characters are Paul and Karen played by Rider Strong and Jordan Ladd. They have been “friends” forever, while Paul is always pushing for a closer relationship. Bert is the not too bright football player like the character played by James DeBello. Then there is the yuppie douche bag couple. The blonde haired Ivy League style jerks always get butchered and for good reason. The look of the film is set in the early to mid-1980s, so that rules out any cell phone usage. We don’t ever learn the origins of the virus, although we do see a dead dog that infects a local hermit. Bert accidentally shoots and wounds the hermit while hunting for squirrels. That night the man comes to the cabin pleading for help. He is a horrible bloody mess who after puking infected blood all over their truck, is set on fire by the guys. The girls are upset by this and it creates a great deal of tension and dissension in the group. Paul finds the decomposing body floating in a lake. The virus has now infected the water supply for the whole town.

Winston Olsen is a young sheriff deputy and quite the strange character. He is bored to death with his job and just likes to party with all the vacationers. Even when the story gets extremely gory he is only worried that that party is ruined.

Another very unique character is Dennis, played by Matthew Helms. He sits on a swing in the front of the town general store. Don’t get to close to him though because he bites, as Paul finds out. He is also known as the “Pancakes” boy who has a black belt in karate. Yes I know that sounds a little strange but you really have to see the movie. 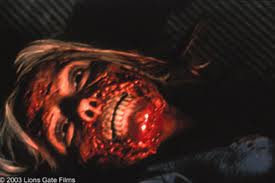 One of the most disturbing scenes in the movie is when Karen who hasn’t been feeling well, lets Paul comfort her while she’s napping. Paul moves his hand below her waist and you could say he has bad aim. He finds out that he is fingering a large flesh wound in her thigh. She is infected. Karen is then ostracized and quarantined from the others. She is locked in a shed with a grungy mattress and a blanket and then served food like a prisoner. The characters are now only interested in their own survival. Even though this movie was made in 1999, the main storyline and the characters reactions to it seem to match today’s fears of the swine flu and global flu pandemics. They all eventually get this virus and deal with it in their own separate ways. The leg shaving scene is quite possibly the most cringe-inducing scene ever filmed. While the blonde guy takes two six packs of beer and runs into the woods. If you look at the beer closely it’s called “Arrogant Bastard Beer”. He does, however, get his comeuppance for abandoning his friends. In one of the movies final scenes, he is killed in a very similar fashion to that of the classic zombie flick “Night of the Living Dead” The last scene shows a semi truck full of tainted bottled water leaving the small town.

There is a sequel, Cabin Fever 2: Spring Fever which is directed by Ti West. It is currently showing at various film festivals around the country and is not yet out on DVD. Eli Roth had no part in the filming or production. So see it at your own risk.