"Let the Right One In" Simply AWESOME!! 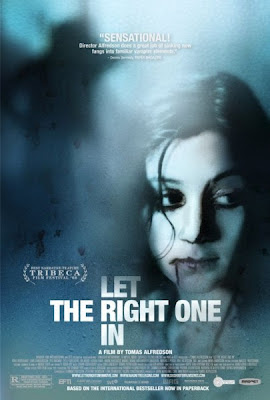 
Over the past few years, the public infatuation with all things vampire has become epidemic. In my mind, this little movie from Sweden tops them all. I do however like the True Blood show on HBO. Let the Right One In is directed by Tomas Alfredson and is based on the book Let me In by John Ajvide Lindqvist (he also adapted it into the screenplay.) There is also an American remake in production that should hit theatres next year.

We begin with Oskar, a twelve-year-old boy living with his mother in a suburb of Stockholm. His parents are divorced and Oskar usually keeps to himself. He is constantly bullied by a group of kids at school and dreams of revenge. He collects newspaper clippings of murders, and violent crimes, while also carrying a knife with him. Although he never acts on these violent urges, it simmers just below the surface. Oskar’s interests are peaked with the arrival of new tenants that move into to an adjoining apartment. Eli is a girl that looks to be about Oskar’s age, while Haken is the older man that accompanies her. Oskar and Eli meet outside at a jungle gym a few nights, both seem interested in one another, but their conversations are short. Eli is always barefoot and underdressed for the weather but is never cold. Haken, on the other hand, packs up a case of curious objects and goes into the woods. After this scene we begin to see what Hakan does for Eli, he kills people and drains there blood for her consumption. Haken has to abandon his kill at the risk of being found out by some hikers and a very inquisitive dog. Eli is not pleased by this and must take matters into her own hands.

There is also a secondary storyline that involves a group of locals who are also interested in the newcomers. They try talking to Haken in the local café, but he just brushes them off. Later that night as one of the drunken men walks under a bridge; Eli is able to get his attention by pleading for help. She then feeds on him and Haken discards the body. The real heart and soul of this movie is in the relationship between Eli and Oskar. You have to keep in mind throughout the movie that these are really twelve-year-old kids. Oskar is aware that Eli is different and doesn’t seem bothered by it. It only strengthens his curiosity. This really comes into play after Eli can’t stomach some candy Oskar gives her. As he hugs her she tells him “If I wasn’t a girl would you still like me?” Although he is not sure what she means, he doesn’t make a big deal of it. After another bully attack leaves Oskar with a bandage on his face; he shares his problem with Eli. She tells him to “hit back, hard.” Oskar does such a thing at an ice skating pond, during a school field trip. Oskar is punished but has renewed self-confidence. 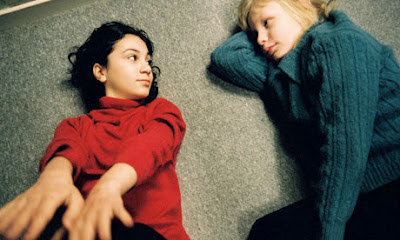 We go back to Haken as he has a teen boy hung upside down in the school locker room. He is interrupted yet again by the boy’s friends. Haken does not want to be found out so he pours acid onto his face scaring him almost beyond recognition. Eli scales the hospital walls (in her Spider-Man scene) to Haken’s room. Feeling that he has failed her, he lets Eli feed on him before jumping to his death. It seems as if Eli has found a new protector and provider in Oskar, but is he really willing and able to do the job? I felt some of the scenes between Oskar and Eli were way above their age, although Eli was in reality over 200 years old. After Haken’s death, she visits Oskar at his window and he invites her in. She then undresses (off camera) and gets into bed with him. Oskar is surprised that she is so cold. There are no sexual implications with this scene, but it shows Eli’s growing trust and overall need for Oskar. In a further scene in the school basement, Oskar makes an effort to become closer to Eli. He purposely cuts his hand in the old “blood brothers” routine. At the site of his blood, Eli loses control and ends up licking the blood off the floor. Extremely embarrassed she asks him to leave. Eli then comes to Oskar’s place and lets him know “You have to invite me in” Oskar is defiant and asks “What if I don’t?” Eli takes a few steps inside and begins to bleed all over. Oskar freaks out and “invites her in.” The following scene is one of the more head-scratching scenes of the movie. As Eli cleans her self up in the bathroom, Oskar hands her some fresh clothes and takes a peak while she’s charging and it’s revealed that Eli is neither male nor female.

As the locals start to suspect Eli in the death of their friend, one of the men breaks into her apartment and finds her asleep in the bathtub. Oskar comes over at just the right time and shouts “No”. This gives Eli the time she needs to pounce on the would be assassin. She tells Oskar that she has to leave town. In the meantime, the bully from school has recruited his even more ruthless brother to get back at Oskar. In one of the films, final scenes at the schools swimming pool; Oskar is told to either hold your breathe for three minutes or lose an eye. The brother grabs Oskar by the hair and holds him underwater. Oskar starts to lose his breathe and panic. There is an intense commotion up above and a severed head falls to the bottom of the pool. Oskar is released as the arm holding him also starts to fall to the bottom. Oskar jumps to the surface to see Eli has rescued him. Thus completing Eli’s full need and devotion to Oskar. The final scene finds Oskar alone on a train with a large box, with Eli inside. Oskar has become the new Haken.