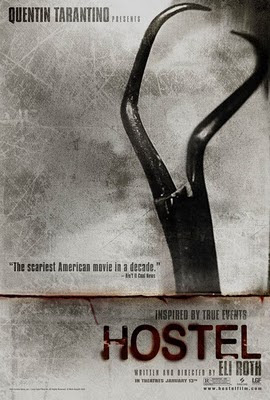 Eli Roth is one sick bastard! This is exactly why he is one of my favorite directors. He is a complete horror fanatic and it. His first film Cabin Fever is an instant classic which will be reviewed on this blog in the coming weeks. Both Hostel films carry the “Quentin Tarantino Presents” credit; which of course adds a little street cred to them.

This was one of the first movies, along with Saw, to carry the lame media label of “torture porn”. Extreme gore and sadistic violence used to shock the audience. Seriously, you know there’s going to be some sick disturbing stuff in this flick. So if that offends you don’t frickin’ see it! The story revolves around three college grads who are backpacking through Europe. These are really good guys, that you could actually see yourself hanging out with. They are played by Jay Hernandez (Paxton), Derek Richardson (Josh), and Eythor Gudjonsson (Oli). The first half of the movie is set up like a skin flick on Cinemax with lots of gratuitous nudity and debauchery. The guys start out in Amsterdam, enough said. Paxton seems to be the leader of the group. Josh is a little more reserved, as he was just coming off a long relationship. Oli (the king of the swing) is most responsible for the comic relief. They meet a local guy named Alex at a club. He directs them to Bradislava, Slovakia for all the hot women they can take. He states that with all the wars, there are few men for so many beautiful women. This scene makes a strong statement that most young Americans have no idea what is happing in the world today. As there actually haven’t been any wars in Slovakia for the past 50 years. This movie has a very strong social commentary on the youth of America. Americans seem to think they have a bullet proof sense of entitlement when traveling abroad. While many people in many other countries despise Americans and their cockiness.

On the train to Bratislava, a small picturesque town in Slovakia, they meet an older business man. The man strikes up a conversation and proceeds to eat a salad with his hands. Josh freaks out when the man touches his knee (a little homophobic) and the man excuses himself. 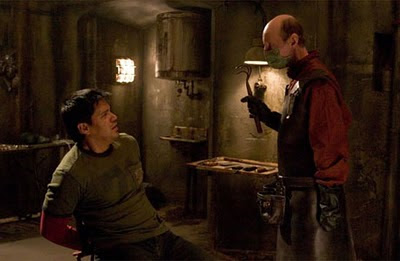 They arrive in Bratislava and check in at the local hostel. This place is quite nice but they will have roommates. When they get to their room they walk in on two hot foreign girls changing. These are the bait girls. They invite the guys down to the spa and they instantly pair up and that night party at a local disco. Josh goes to get some fresh air and is threatened by the Bubble Gum Gang, a group of local kids that extort the tourists. He is saved by Mr. Saladhands. Coincidence? The guys all end up sleeping with the girls, but as morning breaks, Oli is missing. The next night the girls slip something into the two guy’s drinks. Paxton gets himself locked into a supply closet, saving his life. While Josh doesn’t have such luck. Josh in brought into a dank, dark, dungeon like complex and is chained to a chair. Mr. Saladhands then has his devilish way with him. He always wanted to be a surgeon, but has unsteady hands.

Paxton’s search for his friends comes up empty and he eventually confronts the now less than glamorous women they been partying with that last few days. She leads him to an “art show” at this old factory, where we get a cameo appearance by legendary Japanese horror director Takashi Miike. This crumbling building houses the operations of Elite Hunting, a worldwide organization that offers the experience of killing for a price. If you want to kill a local its cheap, while killing an American will cost you. Paxton is able to escape his torture cell, minus a few fingers. He finds out his friends are dead and plans his escape. The clients of Elite Hunting are seen as regular people with regular lives. This is part of the plot of the sequel which will be reviewed next.

The Hostel films bring forth a frightening question. For wealthy adrenaline junkies that have traveled to world; what would be the ultimate high? Writer/ Director Eli Roth came up with the idea for this story from a foreign website that offered such services. Whether this site was legit is up for speculation.