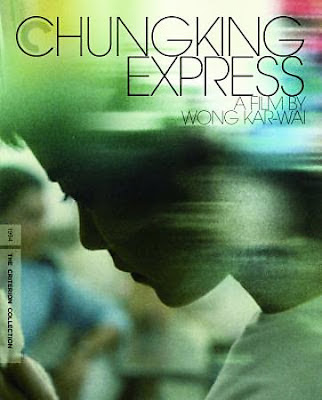 This amazing little piece of Hong Kong cinema, directed by Wong Kar-Wai, is a great example of a modern story told in modern times. This film effortlessly tells two different stories about four different characters in a very fast and kinetic pace.  Both stories bring forth the themes of coincidence, chance meetings, breaking free of routines and overcoming heartbreak. This all takes place as China is about to overtake rule of Hong Kong in 1997.

The first story involves Qiwu, a policeman who finds himself in a sort of personal and professional crisis. His girlfriend May has broken up with him and at one point he almost gives up on anybody calling him to work on a case. Qiwu is a good man, but a lonely man who seems to find solace in food and jogging. He buys cans of pineapple that must have a May 1st expiration date. This is his birthday and also a self-conceived deadline for May to reconcile with him. The storylines jump between this and one of a drug smuggling woman in a trench coat and sunglasses. She gathers together a bunch of Indian men in an attempt to smuggle a load of coke. These men have no respect or regard for the woman who pays them upfront. The men eventually bolt and she is left searching for them. She eventually finds them in a hostel and kills them all. After Qiwu eats 30 cans of pineapple (in one sitting) he ventures out to bar and proceeds to puke his guts out. He is now free of the memory of his five-year relationship with May and looks to move on. He starts to chat with the trench coat woman who pays no attention to him. They eventually share their sorrows and drink until bar closing. She eventually passes out in his apartment. Qiwu seems to be an insomniac as he watches two movies on T.V. while consuming four chef salads. The woman leaves without notice. She then leaves him a happy birthday message on his voice mail. Qiwu leaves us with the feeling that love is a can of pineapple that doesn’t expire. 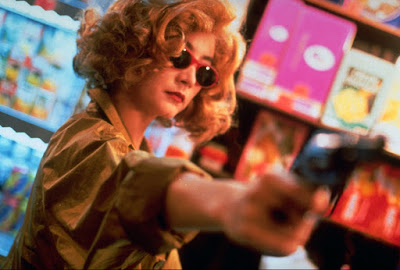 We now go to a second story involving another cop known only as #663 (his badge number). He and Qiwu both frequent The Midnight Express, a local food fast food stand. #663 is often in his police uniform as Qiwu is always in plain clothes. A young free-spirited girl who is obsessed with the song “California Dreaming” starts working at the Express and has a crush on #663. After he has a fling with a flight attendant, #663 is once again lonely and talking to dish rags, stuffed animals and other inanimate objects. The flight attendant leaves him a letter and his apartment key at the Express, in which #663 refuses to pick up. The girl sees this as an opportunity to do some cheering up and possibly more. She sneaks into his apartment and does a little redecorating (and cleaning). She tries to shake things up for ole #663, to show him what he is missing in life. She is caught on a few occasions and is completely embarrassed. #663 has been “sleepwalking” through life and this girl is just the person to wake him up. In a twist, #663 finally asks her out, but she stands him up and goes to California. She leaves him a self-drawn boarding pass dated for 1 year later. After the year has passed she comes back to find that #663 has bought the Midnight Express and is renovating it. She is now a flight attendant and things have come full circle.