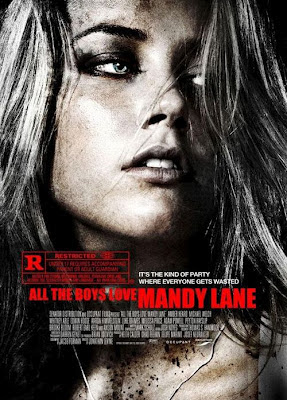 This teen slasher flick has reached an almost urban legend like status here in the United States among horror fans. Just like the recently released Halloween horror anthology "Trick’r Treat". Mandy Lane was filmed in 2006 in Austin, Texas and surrounding areas. Directed by Jonathan Levine, whose follow up film The Wackness came out this summer. Although Mandy Lane did have a U.S. premiere at the South by Southwest festival in Austin in 2007, it has yet to make any kind of theatrical run or even a DVD release. However, it is available on DVD and Blu-ray in other countries (I got my copy from the U.K.). This leaves many fans wondering “What’s the frickin’ hold up?” If you ask me I would have to say money and politics. First, original horror movies, in general, don’t make a lot of money in theatres (I say “original” since it’s not a sequel or a crappy remake). Then you see that this flick only cost about a million dollars to make, which is peanuts compared to any movie in any genre. So you’d think they would have no problem making back there investment, right? This is probably where the politics come into play. Certain plotlines of this movie seem to draw a strong and uneasy connection to the Columbine killings. Although it doesn’t take place in a school per se, but a sprawling ranch. The center of everything in this story is Many Lane herself, played by Amber Heard. She is the hottest girl in school and as the title says all the boys love her. Mandy is the clean and pure picture of innocence. Her parents died when she was young and has been raised by her aunt. She is friends with a boy named Emmet, a sort of every man, not a jock, nerd, or any other stereotype. Mandy invites Emmet to a party held at the blond-haired “jock” Dylan’s house. Emmet is really not welcome there as Dylan constantly harasses him. While drinking on the roof Emmet proceeds to convince Dylan that if he were to jump off and into the pool that it would really impress Mandy. So the drunken Dylan jumps and comes up a bit short and hits his head on the edge of the pool, killing him instantly. Mandy cuts her ties with Emmet. The story flashes forward nine months, as a group of popular kids plans a getaway at a ranch. Mandy agrees to join them and this is really where the bulk of the movie takes place. 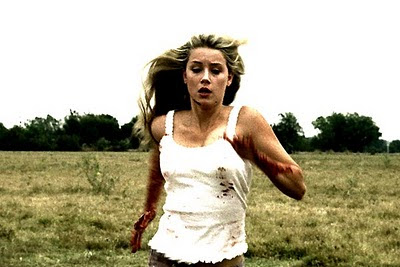 The rest of the cast does seem to fit into the regular character stereotypes for a horror movie. You have the ditzy blonde girl, the hot guy and of course the token black guy. Although Mandy is blonde and uber-hot, she doesn’t seem to fit any of the usual clichés. She is smart, well spoken, and seems fairly grounded. Bird (the token black guy) is the first one to put the moves on her, but it denied. At this point, we also meet Garth, the studly ranch hand, who lives in a shed near the house. After many, many drinks and many, many bong hits; the teens start to disappear. First its one of the guys, then the brunette, then Bird. Is it the mysterious ranch hand who is doing this or some other homicidal maniac? Unlike most teen slasher flicks when the killer isn’t revealed until the last five minutes. The viewer finds out with about a half hour to go. You would think this would work against the plot, but for some reason, it plays quite well as there are more twists to come.


This movie really keys into the intense emotional highs and lows of high school teens no matter what clique or group they belong to. The girls (and boys for that matter) all have body image issues and are always defending themselves. Many Lane is, of course, the hottest girl in school and she knows it. In a scene where that all go swimming Mandy plays the role of a tease absolutely perfectly. She can make any guy do anything she wants. Because you never know she might really like you. Not! This story is effectively grounded in reality, and the feelings it brings to the surface. There is no masked psychopath, no supernatural demons. This is a story that I’m sure most everybody can relate to in one way or another. There is a Mandy Lane in every high school in America. The question is what will you do for Mandy Lane?